If you’re like many people, you probably don’t think of your garage door as the most technologically advanced part of your home. But our quick look at the history of technology for garage doors will show you just how far we’ve come – and will give you a peek at where the garage doors of tomorrow will be. 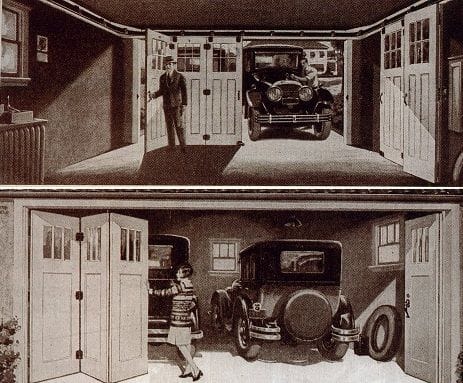 The first garages were barns and the first garage doors were barn doors that split in the middle and swung open. They were heavy and wooden, sometimes with glass windows in the upper third of the door. In fact, like so many other things today, some modern garage door styles mimic this graceful-looking (but actually cumbersome) garage doors of the past. Of course, in the early years of the 20th century, a car was a luxury only the richest families could afford and even then, it often sat side-by-side horses and carriages in the garage.

But all that began to change in the 1920s when Henry Ford began using an assembly line to produce the Model T. Between 1921 and 1924, the cost of a Model went from $850 to $290, making it tremendously more possible for the average American family to purchase one. But until the end of World War II, the bulk of America’s middle class lived in urban areas where cars weren’t practical and there often wasn’t even room for a family to have their own garage.

American car ownership and the march of the garage door toward its current technological state really began in the post-World War II era, as millions of Americans moved out of city centers to new suburban homes. Farther than ever from work and shopping, cars were a requirement of this new suburban life. And thus garages began to become a standard feature of new homes.

Illinois, as well as other Midwestern states with cold weather, like Indiana, Michigan, Wisconsin, and Minnesota, were the headquarters of most garage door innovations in the early and middle part of the 20th century. Garages were needed in this area more than other areas of the nation to protect cars from harsh winter weather. As the per capita number of cars and garages rose, people opted for improvements in design and function of their garage doors.

The overhead door was one of the first advancements in garage door technology. Although overhead doors had been around for decades, they didn’t become standard until well into the 20th century. The biggest perk of an overhead garage door was that it saved space: you could pull right up to the garage without having to make space for large swinging wooden doors to open.

The next logical advancement in garage doors was the creation of a sectional door. Instead of one large platform that swung out and up, overhead doors now curled smoothly up. This not only saved space, but made it easier to open garage doors. But garage doors were still generally made of wood and were quite heavy.

Car ownership continued to expand in the U.S. in the 1960s, as did the federal highway system. The government launched an advertising campaign for American families to take to the highways and see their country. As a result, more service stations were needed across the country. Service stations really made the push for the next major advancement in garage door design: the shift from wooden doors to the much lighter aluminum garage doors. But these doors had problems: structural stability, the need for frequent oiling, and the prevalence of rust. Wooden doors remained the dominate choice for residential garage doors until the advancements of the 1970s solved some of these issues.

By the 1980s, most homes not only offered attached, two-car garages, but the doors on these garages were consistently made from steel. This was also the decade where steel doors began to resemble the better-looking wood garage doors of the past: raised paneling and even faux-wood grain enticed buyers as much as the durability and low maintenance of steel garage doors did.

But by the late 1980s, this problems was fixed with the widespread sale of fixed code systems and another advancement became standard on garage doors: safety measures.

In 1990, the federal government passed the Consumer Product Safety Act, which dictated that any garage door opener made after January 1, 1993 had to meet certain safety requirements. Foremost among these requirements was that every electric garage door had a system that would cause the garage door to stop moving and actually reverse if something broke the plane of the door’s path or if the door encountered resistance of any kind.

In 1998, Wayne-Dalton’s WayneGard finger saver was introduced to the garage door industry. This was a major step forward for safety in garage doors. Old-style sectional door would often pinch hands and fingers and could even crush the hands and fingers of kids. The finger saver technology created shaped joints between the sections that actually push fingers out of the way. If you have kids, you simply must have a garage door with this finger-saving technology.

The Wild and Wonderful 21st Century

Remember back in the 80s when remote control electric garage door openers were hacked and then they invented the fixed code system to solve that problem? No surprise that hackers quickly found a way to get around that “problem.” In fact, you can become a garage door hacker, if the door uses a fixed code system, in a matter of minutes these days. So the garage door remotes of the 21st century now feature rolling code. Rolling code remotes are not 100% safe from hackers, but they’re better than fixed code ones so check your remote and update if you need to.

But just like everything else in our lives these days, the real advances in garage doors are linking them to the internet. That’s right: your garage door can get online. Keyless entry for garage doors used to mean either an electric remote opener or a keypad on the outside of the garage door. Some keypads even allowed for multiple codes, which meant you could give visitors or people who needed access to your house temporary or deletable codes. Those were great but connecting to WiFi and the internet is even a step up from there. Let’s look at what this option adds to your garage door…

Many garage door units come with MyQ® Technology, which means you can connect to your garage door from your smart phone, like an iPhone or an Android. Let’s say you get to work and think “did I close the garage door when I left?” It’s a common problem. Now instead of calling a neighbor or worrying all day, you can simply go onto the app on your phone. It will tell you whether or not the garage door is open.

But what if the garage door *is* open? What then? Not to worry. From the app, you can also close your garage door. Of course, that also means you can open your garage door from the app too. Need to let the washing machine repair man or the cable guy in while you’re not there? Want UPS to leave your package inside your garage door? A click on the app and your door is open – and closed again, when you want it to close. As a safety bonus, when you close or open the door from the app, the system flashes a few lights so no one in the garage is caught unaware. Of course, the system has all the regular (by now) safety features, which will make the door stop and reverse if it senses anything in its path.

MyQ® Technology does even more. You can set the app, which is a free download, to alert you anytime your garage door opens or closes. Whether that means monitoring your teen’s comings and goings or being the first to know when a thief has accessed your home, this feature is a safety must these days.

Our favorite part about the LiftMaster 8550W Elite Series of garage door openers is that this technology comes built in: no need to buy a separate WiFi system that can be confusing to connect to an older garage door opener. Plus, the system also allows you to communicate and control any other MyQ® Technology devices in your home like lamps, lights, door locks, and thermostats, further enhancing your control of the safety and comfort of your home.

Tomorrow and Beyond – with Garage Doors

The connectivity that the LiftMaster 8550W Elite Series offers will only continue to be enhanced in years to come. The next step, already in the works, is that your garage door will sense when someone is home and everything from lights to TVs to dishwashers to thermostats will automatically adjust (based on your settings) to who is home and who is away.

If you’re living with a garage door that’s still in the 1980s, it’s time to upgrade to the 21st century. AR-BE Garage Doors services the entire Chicagoland area and for a limited time we’re offering $50 off your new garage door. If you’re as excited about this garage door as we are, give us a call today at 800-339-3256. We’re ready to bring your garage into the next century.

Scroll to Top
We use cookies to ensure that we give you the best experience on our website.
If you continue to use this site we will assume that you are happy with it.OkPrivacy policy